Bhakti Yoga and the Bhagavad Gita with Gregor Maehle

BHAKTI YOGA AND THE BHAGAVAD GITA WITH GREGOR MAEHLE

Online Course
6th – 17th March 2023
Mon- Fri, Sydney 5pm, UK 6am, Paris 7am, L.A. 10pm
Upon completion each lesson will be uploaded to Vimeo and is then available on-demand and longterm for all participants.

Bhakti is the yoga of divine love. In this workshop we will establish a definition of what the Divine is and what it is not. The Divine will be shown to promote intensity, creativity, novelty and co-creation with all life forms. We will also come to understand that the Divine is not a solid state but an ongoing process.

We will analyse various historical Bhakti movements and will attempt to learn from their strengths and weaknesses. We will also look at the psychological advantages and obstacles to practising a yoga of love. Finally a non-sectarian, 21st century approach to bhakti will be presented, including practices designed to improve our quality of life, happiness, contentment and the knowledge that each of us matters to the Divine. An important part of that is to learn to see the Divine in all those we struggle to understand.

The main source for Bhakti is the Bhagavad Gita, the Divine Song. The Gita itself presents a sophisticated mix of Jnana Yoga (yoga of knowledge), Bhakti Yoga (yoga of devotion) and Karma Yoga (yoga of action). We will learn to chant some of the important stanzas and then analyse the practical lessons for life that the Gita imparts.

The Raja Yoga of Patanjali is also described in the Gita. Whereas in the Yoga Sutra the focus is on Raja Yoga and Bhakti (here called Ishvara pranidhana) takes up only about 5% of the stanzas, in the Gita Ishvara pranidhana takes centre stage. In the Gita Ishvara is called Purusha Uttama (Purushottama), the Supreme Being. The definition of the Purushottama very much interdigitates with the description of Ishvara in the Sutra but friends of the Sutra can find a lot more detail in the Gita to increase their understanding of the Divine. To facilitate this further Gregor will not only analyse and juxtapose viewpoints from the ancient commentators on the Gita such as Shankaracharya and Ramanujacharya but will also integrate the insights of recent luminaries such as Shri Ramakrishna and Shri Aurobindo.

LIVE
6th – 17th March 2023
Bookings are open for this event until 17th March at 2.30pm UTC+10
The live course includes longterm access to the On-Demand version of the course.

ON-DEMAND
After 17th March 2023
Students have to buy via On-Demand.*

Upon Purchase:
You will receive a purchase receipt and shortly after an email titled “Important information for the event…”. This email will include all information regarding access to the live event.

Gregor is a life-long yogi and has over 40 years of experience of yoga study and practice! 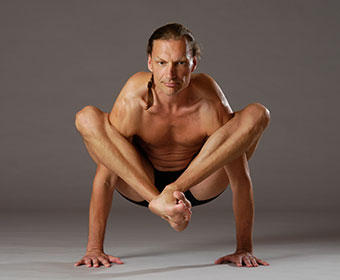 Gregor and Monica are genuinely amazing people, I felt engaged and energised from the first minute to the last minute of this incredible experience. Even though they have a lot more Yoga experience than me I felt they treated me as an equal and taught from a place of love and authenticity throughout.
– Lincoln. Perth, Australia

Any questions? Please ask us.